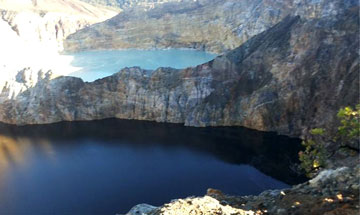 The volcano contains three striking summit crater lakes of varying colors. Tiwu Ata Bupu (Lake of Old People) is usually blue and is the westernmost of the three lakes. The other two lakes, Tiwu Ko’o Fai Nuwa Muri (Lake of Young Men and Maidens) and Tiwu Ata Polo (Bewitched or Enchanted Lake) are separated by a shared crater wall and are typically green or red respectively. The lake colors vary on a periodic basis. Subaqueous fumaroles are the probable cause of active upwelling that occurs at the two eastern lakes.

The lakes have been a source of minor phreatic eruptions in historical time. The summit of the compound 1639-m-high Kelimutu volcano is elongated two km in a WNW-ESE direction; the older cones of Kelido and Kelibara are located respectively three km to the north and two km to the south. The scenic lakes are a popular tourist destination.

Kelimutu is also of interest to geologists because the three lakes have different colors yet are at the crest of the same volcano. According to the local officer at Kelimutu National Park, the colour changes as a result of chemical reactions resulting from the minerals contained in the lake perhaps triggered by volcano gas activity. Kawah Putih lake in West Java, south of Bandung, is another crater lake in Indonesia with some similarities to the lakes at Kelimutu. 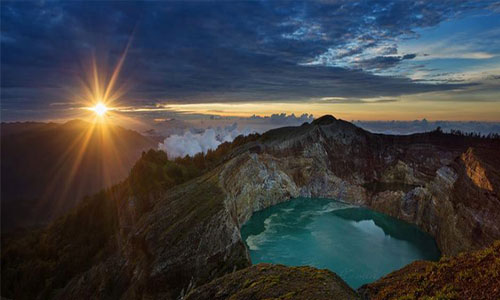 In the early days of developing the local national park in the Kelimutu area, there were some disputes with local communities over the use of the resources. More recently, forest rangers have worked to develop better relations with nearby village communities and overall management has improved.

The closest airports are Maumere, and Ende. There are regular flights to Ende from Bali. The drive from Ende to Moni, the town at the base of Kelimutu where accommodation is available, takes about 3 hours, while from Moni to Kelimutu vehicle park, a 13 kilometers needs 45 minutes. Usually tourists sleep one night to catch sunrise at Kelimutu.

View all posts by indoflorestrip →